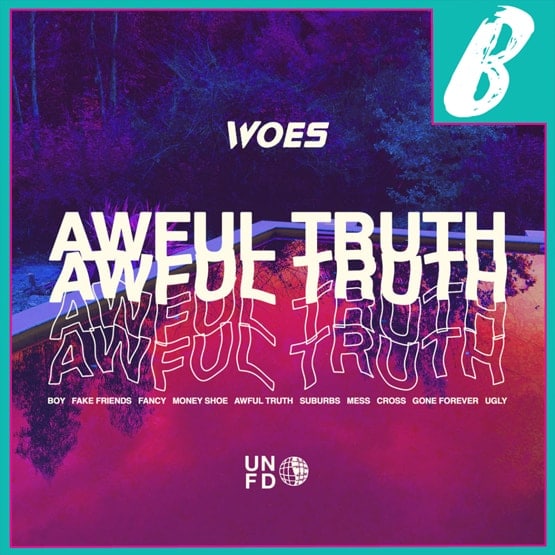 Scottish pop-punks Woes released their debut album, Awful Truth, a few weeks ago via UNFD. These pop-punk hopefuls teamed with acclaimed producer Seb Barlow who has worked his magic with bands such as Neck Deep, WSTR, and Roam. It sounds like a match made in heaven. Featuring a collection of ten unique takes on the pop-punk genre, a tireless effort that has seen Woes’ members DJ, Sean Duddy, Luke Bovill, and Ryan Neish draining their whole being into this collection of sound.

But, are Woes just basic pop punk wannabes hoping to transform a genre that has shown zero interest in changing? Or, are these four talented musicians the next breed of pop-punk genius? Let’s find out.

A magnificent little quickie, as Woes wastes zero time getting the blood rush going, heart beating, and adrenaline running. “Boy” is a wonderful taste of modern-day pop-punk done at its finest. A fast-paced, in your face intro piece that will stick with you through your Awful Truth journey. Sooner or later, you’ll be screaming “so, boy. What do you want from me?” at yourself in the mirror.

“You’re a vampire,” your new obsession, what you’ll be singing among your friends for days to come. “Fake Friends” continues the straight to the point trend of “Boy,” smashing catchy choruses with a relatable subject matter to keep listeners invested for the long run. “I’m just a failure, so I’ll see you later, and that’s fine.” My favorite pair of lyrics I’ve heard all week.

Instrumentally, Woes hits it out of the park with “Fake Friends,” cutting zero corners, keeping the energy high, and will somehow find its way onto your next fitness playlist.

Woes’ pop-punk roots truly shine with “Fancy,” a catchy hot mess, cliches galore, and just the right amount of love-filled angst. A real banger of a tune, a song I’m sure would translate wonderfully in a live setting with a packed sing-a-long ready crowd.

“Fancy” hands down will become your summer highlight, as your inner ear worm keeps you singing for hours upon hours. “Angel, could you ever love me at all,” the chorus that will dictate these next few months of summer. “Fancy” is such a good track, everything I could have wanted from Awful Truth, which also had me singing along for hours as well, annoying my wife.

On paper, “Money Shoe” is a great song. But, unfortunately, I just never seemed to grab a connection. Instrumentally, “Money Shoe” is a very fun track that truly does stand out among the other nine tracks featured on Awful Truth, but it just wasn’t my cup of coffee.

The baseline structure of “Money Shoe” is great, in which I can see the potential of this song in a grander form, as it’s quite relatable. For myself, it’s just missing something to fully push it over. But, like any song, my opinion could always change down the line, as I give Awful Truth more plays throughout the summer.

As far as title tracks are concerned, “Awful Truth” is on the good side of the scale. Not a mind-blowing affair that will give you the biggest orgasm of your life, but it’s good enough to hold attention and keep you entertained for hours. Featuring Woes’ brand of fast-paced tendencies without being too forceful, “Awful Truth” is in a great position to be the backbone of this album.

Lyrically, I will admit I found it to be the weakest when putting it to bat against the rest of the album as a whole, but where the track lacks lyrical quality, Woes makes up for it in pure instrumental goodness. If you’re looking for a song to keep your heart beating in pop-punk fashion, this is the one for you.

For sure a grower. “Suburbs” is kind of like that relationship where you’re unsure of its outcome, but in the long run, it was worth the fight. It took me a good few listens to truly grasp the message Woes was pushing through with this one. When it comes down the line, “Suburbs” is a phenomenal track, it’s meaning, the raw passion flowing through the words being sung, and the true talent being displayed with each note.

Taking a bit of a break from its high impact siblings “Fake Friends” and “Fancy,” “Suburbs” is still filled with crazy antics and sing-a-long moments just more on a refined soundscape.

Tuning down the teen-angst just a little, “Mess” takes power ballads to a whole new level of pop-punk goodness. Calling this masterpiece of a track an emotional tune would be selling it way too short. Woes have proven time and time again with this album that they’re trying their hardest to stay clear from the usual pop-punk template, and “Mess” is the perfect example of that sentiment.

“Mess” has set itself far and apart from the rest of Awful Truth, a track I’d love to hear on a more acoustic forefront. The raw nature displayed throughout “Mess” on an emotional level is simply amazing, Woes never miss a beat when it comes to pulling on the strings of one’s heart.

Transitioning out of the comfort of the pop-punk genre, Woes showcases no one genre can contain their passion for musical creation. Utilizing the familiar melodic structure of “Money Shoe,” “Cross” manages to stick the landing of transforming the pop-punk genre to a whole new level. At times, “Cross” simply sounds like it’s by a completely different band, and that I’m listening to a whole new album. It’s a great feeling to hear the genre transition past its predestined rules and boundaries.

A fun and complex problem to face when figuring out a song’s position on an album, as I’m sure “Cross” would have stood out of place if presented earlier in the album. But, as Awful Truth enters its second half, Woes slowly swaps out the familiar and sometimes generic pop-punk sound for something more original and fresh. “Cross” placement as the eighth track was perfect.

“Gone Forever” sounds like a complete mess, and not a good one. “Gone Forever” is far from my favorite song off this album. At times, the track sounds like it knows what it wants to become, but houses way too many variables that are keeping it from shining. Honestly, this was the only track I wanted to skip whenever it would come around. Instrumentally, there are so many ideas clashing back and forth that a clear mesh just doesn’t ever seem to form.

Deep down, I can feel the passion, energy, and heart that went into the track, but as a song featured on the bottom half of an already damn good album, I kind of expected a bit more at this point.

A wonderful and beautiful closing piece. Woes close out Awful Truth with one of their best tracks, “Ugly.” Vocally, “Ugly” shows off range, emotion, and clear motive. I want more of this when it comes to future Woes albums. Proving they’re a band that shouldn’t be messed with, and with heavy hitting tracks like “Ugly” at their disposal, I’m more excited for this pop-punk band’s career than I have been for any other band in the genre in a good while.

As a collective unit DJ, Sean Duddy, Luke Bovill, and Ryan Neish have created something beautiful with this one. Smashing through expectations and genre cliches to create an amazing piece of art. A truly great closing number.

Awful Truth is an album that has its fair share of ups and downs, human interaction, and emotional highlights. Woes is a true force in an already packed pop-punk world, but with albums like Awful Truth to kick things off, they certainly have an exciting future to look forward to. If you’re a fan of simple, generic pop-punk riffs and catchy choruses, this album is everything you’re looking for. But, if you’re someone that’s looking for a little more from the genre, hell, listen to Awful Truth anyway, it’s that good. I’m looking forward to hearing more from these four pop-punks very soon.

If you’d like to check out Woes’ debut album Awful Truth for yourself, head over to any of your favorite streaming services now.