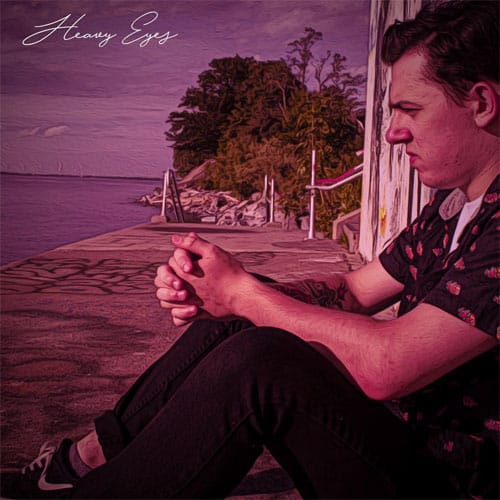 Jake SantaLucia is on a roll when it comes to releasing new music in 2021. Following his latest release, “What’s Left of Us,” SantaLucia is back with what I believe is his best song to date, “Heavy Eyes.” No delays with this one for a change. But, is “Heavy Eyes” actually SantaLucia’s best song? Or, is it his worst, and I see it from a friendship pair of glasses. Let’s find out.

A beautiful melancholy acoustic-pop piece that’s sure to leave you in tears, and at least in my opinion, we could all use a good cry-session from time-to-time, and “Heavy Eyes” will give you that while also providing a hopeful ray of light at the end of the tunnel.

Beautiful instrumentals dance around SantaLucia’s lucid vocals, grasping your senses like a warm Spring hug. Production on “Heavy Eyes” is the best I’ve seen displayed by a piece of music from SantaLucia since I’ve known him. There’s simply something different about this one, and I’m all here for it. “Just give it some time, and your heavy eyes will get to sleep at night,” lyrics haven’t hit me this hard in a very long time. Relatable, passionate, and filled to the absolute brim with pure emotion.

“Heavy Eyes” proves that Jake SantaLucia is ready for the big league. I’ll say I’ve hit replay on this specific track since its initial release yesterday than I have on some blink-182 songs, and for those who know me, that’s quite the honor. This one will be one I keep to my chest for months and years to come.

Jake SantaLucia being a close friend of mine, has nothing to do with my emotionally intense review. “Heavy Eyes” is hands-down the best song the New York-based music maker has released in the almost six years I’ve had to hear him sing through the headset while gaming together. A joyful blast of love, pain, and hopefulness, this one has it all. I’m now holding SantaLucia up among my favorite acoustic artists and am anxious for his next release already.

If you’d like to keep tabs on Jake SantaLucia check him out on Twitch where he regularly makes a fool of himself, as well as on Twitter for further music releases.