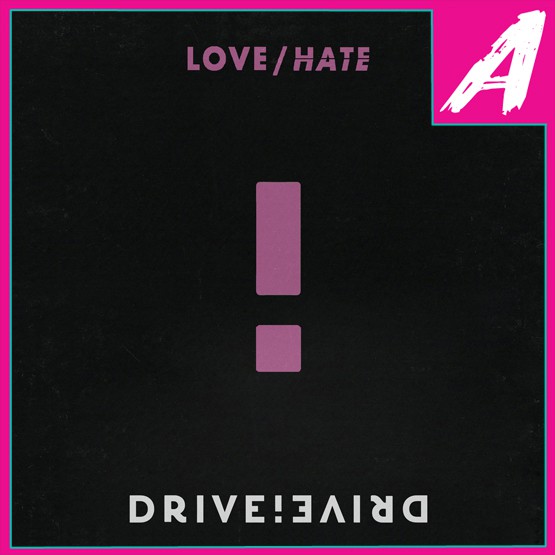 Not another internet pop band you say? Oh, this is going to be fun. Alternative-pop group Drive!Drive! are making some pretty big claims with their self-entitled “not another internet pop band” motif. Riding the current from their debut EP, Love/Hate which saw its release earlier this month, these Nashville natives clearly have some big dreams they hope to fulfill through musical fusion.

But, is their destiny to simply fade to black and become the thing they fear the most? Or, are Drive!Drive! the future of a decaying genre that displays very little quality and substance nowadays? Let’s find out. Internet pop band.

Getting the party started, Drive!Drive! waste zero time getting the blood pumping. Seriously, “Feels 2.0” might be the best thing to happen to the Jazzercise industry since the ’80s. But, as great as I’m making the starting track of Love/Hate sound, it’s honestly the worst of the bunch, and that right there is saying something. Now, don’t get me wrong, it’s a great song but sounds more like a mid-card player rather than a hard-hitting home runner.

Instrumentally, “Feels 2.0” is insanely fun, I literally spent hours dancing around my chair like a 14-year-old teenager excited for the next school dance. The musical fusion displayed throughout “Feels 2.0” feels real, deep down to the core. Not the crap the alternative-pop genre has been pushing out this year. So, even if I don’t think it’s a good starting track, it’s a wonderful addition to Love/Hate as a whole.

Keeping with the ’80s shopping mall vibe, “R.I.P. Summer” is an instant dance hall classic, and works wonderfully coming off the fire filled heels of “Feels 2.0.” Can anyone say “song of summer 2019?” Because if you’re not thinking that, you might want to give this kicker of a tune another spin. The boys in Drive!Drive! truly know what they want, how they want to plan their attack, and how to conquer that inner earworm.

Seriously, who else could make the lyrics “just like Danny and Sandy” so seductive and instantly replay in my head over a complete body snatching, infectious danceaholic beat? “R.I.P. Summer” might not be the most complex song in the universe, but it’s a fun mindless mess that will help leave the worries of the world behind.

Love To Hate You:

Now, we’re getting into the cream of the crop, the true bread, and butter of Love/Hate. “Love To Hate You,” the lead single off Drive!Drive!’s debut EP is one of the best songs to be featured on this five-track affair. The fate of the alternative-pop world might very well rely on the success of this very song. All jokes aside, “Love To Hate You” is a true banger, instrumentally and vocally, all the best qualities of this up and coming alt-pop band is showcased in full glory.

I fully expect to see this very track on the next big Netflix romantic comedy, it’s that infectious. There’s simply nothing to hate about this straight forward, in your face, and all over the place display of pure art.

Personally, “Just Say” is my favorite track off Love/Hate, I believe I replayed this very tune around thirty times while putting together this review. Alternative-pop fans will be singing along to this one with ease. It’s not hard when you have lyrics such as, “just say, anything to me. Just say, you don’t want to leave” on the forefront. This has to be one of my favorite songs I’ve heard this year so far, it’s a barebones, almost naked tale of love and desperation. A truly relatable masterpiece.

If you only have time to listen to one track from Love/Hate, make it “Just Say,” and you’ll be hooked for life.

Aside from “Just Say,” “No Good” is my next “I replayed this way too many times” song off Love/Hate. It’s a simple tale of being hated by everyone, not being good enough, but not caring in the slightest. Instrumentally, “No Good” is pretty basic, but its the basic nature of this raving closer that helps close out an amazing EP on a high note. Featuring, one of the more catchy choruses featured on the whole damn thing, I see this one being a huge hit among those rebellious young adults.

“No Good” might be a song about not being good enough, but this track is far from being no good, and has me completely excited to see and hear what Drive!Drive! have up their sleeve for the future.

All-in-all, Drive!Drive! are still simply an internet pop band, with a twist that makes them the complete opposite. Love/Hate has shown me that the alternative-pop genre can still be fun, that substance and quality can still be achieved, and that real musicians still have room to shine.

If you’re interested in checking out Drive!Drive!’s debut EP Love/Hate for yourselves, you can find out how by heading over to the band’s official website, where they have all the information your little heart could possibly want.