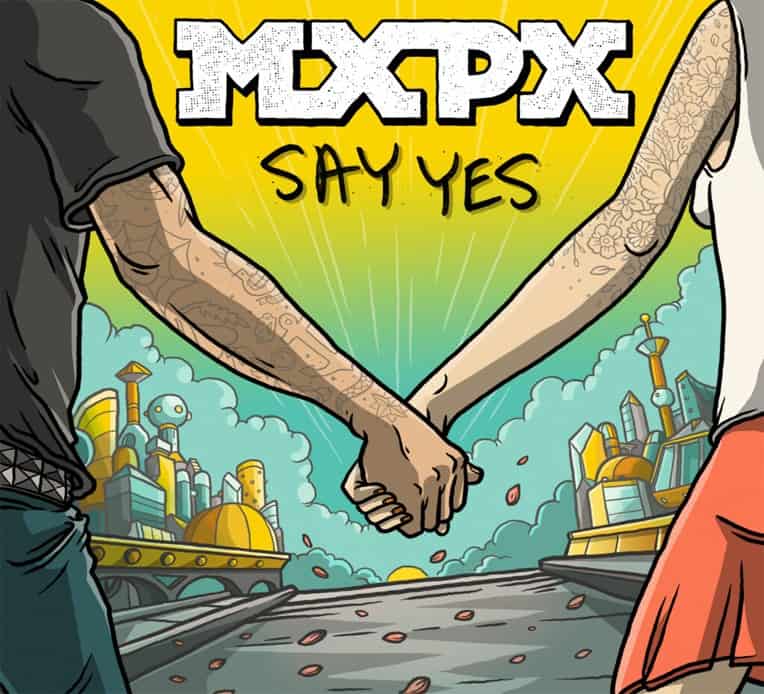 When does MxPx and frontman Mike Herrera ever disconnect from the music sphere? The answer would probably be when they’re dead, to be honest. But, luckily for us, that’s not the case, as MxPx wants listeners to “Say Yes” to their latest single featuring RIVALS frontwoman Kalie Wolfe.

What’s being described as a danceable, fast-paced punk love song to remember, “Say Yes,” could very well be one of MxPx’s best songs in a good while. But, on the flipside. It could also be a passable memory that will slowly fade to black as these all-star musicians move on to whatever’s next. So, let’s find out.

“I’ll wear my best, and you can wear that dress.” I haven’t sung and danced this much in months. MxPx is doing what they do best by kicking off mid-summer with an instant classic style love song guaranteed to be overplayed by the year 2030 due to how many couples will annoy those around them with the track’s relatable, memorable, and fun singalong style lyrics.

“Say Yes,” instrumentally is classic MxPx; it’s fast, danceable, and just all over the place in the best way possible. Vocally, both Mike Herrera and Kalie Wolfe blow things out of the park. The harmonies these two hit together are amazing, and both vocalists are completely in sync with each other that it really helps “Say Yes” be elevated to a whole other level.

I can’t wait to hear this one at the next MxPx show. It should get concert-goers moving their feet and singing at the top of their lungs—the making of a classic MxPx song.

MxPx is making the summer of 2021 a memorable one, and with a track like “Say Yes,” further showcasing why they’re still one of the best punk acts around. I suspect this one will be around for quite a while and expect listeners to be dedicating this one constantly over the next few months.

If you’d like to keep up with all things MxPx, make sure to check out their official website, where you can find a fun summer challenge from the band, as well as connect with the guys via MxPx’s social homefronts. Additionally, you should also check out RIVALS’ official website for everything on the rival side of life.