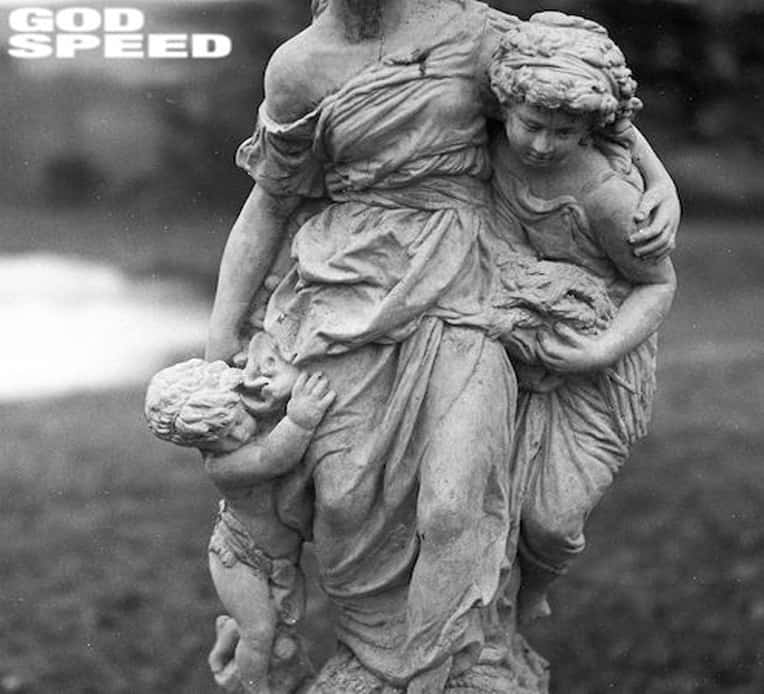 Alt-rock hopefuls Young Culture are gearing up to release their new “feel-good” EP, Godspeed, later this week. Described as a hopeful and relatable summer release, Godspeed follows the band’s debut self-titled album in attempting to cement members Alex Magnan, Gabe Pietrafesa, and Troy Burchett into the psyche of pop-rock lovers.

On Godspeed as a whole, vocalist Alex Magnan shares, “these 5 songs are just a showcase of what we’ve always been about, solidifying who we are and what we do. I want the listeners to feel the different emotions we’re trying to convey with each track. Each song has something special to offer, and I want it to be felt to its fullest.”

So, did Young Culture manage to put together five timeless pop-rock tunes? Or, does the new EP fall on weak legs? Let’s find out.

“Godspeed” kicks off Young Culture’s new EP with a bang. Instrumentally, the track is your classic pop-punk affair; it’s fast, gets the blood pumping, and will keep listeners entertained for hours as they hit replay over and over again.

The perfect song to blast through car speakers while stuck in horrible freeway traffic. Lyrically, “Godspeed” is high on the catchiness meter. I can’t count how many times I was walking around the house perfectly normal, and the next second I’m busting out my air drumming skills while singing loud and proud, “It doesn’t matter where we go as long as you are mine.”

“Godspeed” is the perfect opener for what can only be described as an amazing musical experience.

Young Culture’s first single of this release cycle keeps things subtle and lowkey. You’d figure a track this mellow after the previous high-speed collision would be in bad form. But this works perfectly. It’s certainly a mood, and I’m here for it.

Not as catchy as “Godspeed.” But “Hum” makes up for that by being such a clear-cut jam style of song that will only shine brighter in a live setting. Seriously, I can’t wait to catch Young Culture live when they make their way to Southern California. I’ll for sure be singing along to “Hum” in the front row.

“Hum” is in no way one of my favorite tracks off this release. It’s actually my least liked, but that’s just saying something when my least liked track is still one I fully enjoy.

Young Culture keeps giving me shivers (no pun intended). The last time I remember feeling this excited for this specific music genre was listening to Something You Know Nothing About by The Years Gone By. “Shiver” is 100% the kind of song that will play in the background of late-night parties and sun-kissed road trips.

I’m almost certain listeners will have “Open up/Open up” stuck in their heads for a good while. I know I still have it somewhere in there at this exact moment. Instrumentally, “Shiver” continues the classic nostalgia-filled overtures anyone familiar with the genre would recognize and love.

“Shiver” is a complete chill-out track, and I can’t listen to this one enough times in one day.

Everything from the band’s heart-pounding instrumentals to Alex Magnan’s skyrocketing vocals is just filled with so much passion and emotion that listeners will get carried away into complete musical ecstasy.

Memorable and simply an instant classic. There are just too many words one can use to describe “Simplemindedteens.” I want more of this going forward. So, I’m now anxiously awaiting to see the paths Godspeed will send Young Culture in the near future.

As I’ll forever mention, I’m always the most brutally honest when it comes to ending tracks. Luckily, in this case, Young Culture has nothing to worry about. “Head High” is a slow jam masterpiece that bookends the high energy displayed throughout Godspeed in perfect unison. Sticking the landing would be an understatement.

Instrumentally, Young Culture takes things down a couple of notches while at the same time not losing that electric feeling that was previously showcased in the last four tracks.

A song that is worthy of a thousand first dances. It’s hopeful, honest, and raw. “Keep your head high/Above/Breathing/Breath out” lyrics haven’t felt this raw and real for any release that I’ve listened to this year. I’m more than sure “Head High” will be a top track for these alt-rock power players as soon as listeners get their hands on Godspeed.

Young Culture is bound for greatness, and with releases like their self-titled album and now Godspeed, it’s simply a matter of time. A timeless classic waiting to happen, Young Culture treats listeners with dignity and doesn’t shy away from the truth within the themes being played around with between “Godspeed” to “Head High.”

These five tracks alone should make for an intriguing live experience that I can’t wait to see for myself soon.

If you’d like to check out Young Culture’s new EP, Godspeed, for yourself, you can do so on July 30th, when it slams its way onto streaming services. If you’d prefer a more physical product, you can also pick up a Flexi set through Equal Vision Records’ online shop.