Getting Emo With Jake SantaLucia 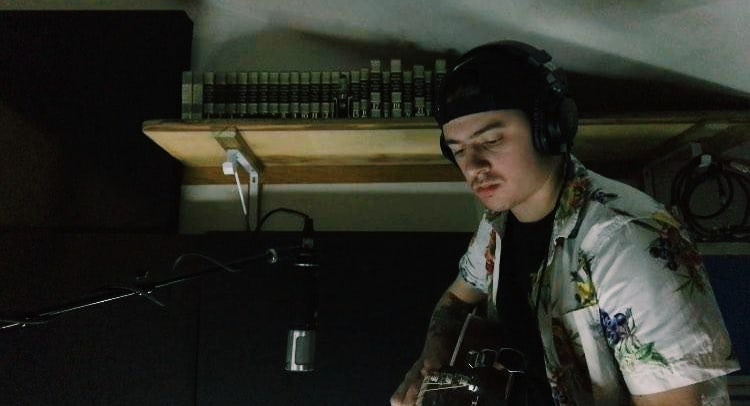 Acoustic-pop hopeful Jake SantaLucia has been hard in the studio putting the final touches on his upcoming singles, “I Remember” and “Monuments,” both of which will be featured on his upcoming EP Life’s Not Fair.

While hard at work in the studio, Jake had a few minutes to spare to sit down with us and let us delve into his musical inspirations, the many delays that seemed to plague his upcoming EP, story beats behind his upcoming singles, and his infinite plan to drown the world in tears.

BLAST: Howdy, thanks for taking some time to chat with us. So, for people that aren’t too familiar with you, can you please state your name and what exactly you do.

JS: My name is Jake SantaLucia, and I am an acoustic-pop artist from Buffalo, New York.

BLAST: How long have you been making music?

JS: I’ve been making my own music since I was maybe 11, or 12. But, I released my first real EP on June 21 of 2013. Since then, it’s just been a non-stop process of writing songs and figuring out which ones are the best to record.

BLAST: That’s honestly quite a bit of time. You’re currently working on your upcoming EP, Life’s Not Fair, which from my understanding has had its fair share of delays. Do you care to elaborate on those delays for listeners that might think your new EP is stuck in a delay loop?

JS: All the delays are due straight up to putting as much as we can into the songs to make them the best they can be. “I Remember” alone took around four months to get it to the point of release, which you will hear very soon. As for the EP; in general, as a delay, I personally thought it would be better to release a full five-song EP that tells one cohesive story with the first two singles being kind of the “roots” of what the EP is all about.

With that said, the two singles I’ve been building up WILL be released by early to mid-October, no more delays for those two. I can promise they are worth the wait haha.

BLAST: That’s one-hundred percent respectable. Something that you’re clearly passionate about should be handled with care. You’re not treating Life’s Not Fair as if it’s just something to be thrown away, and I think listeners will appreciate that. Correct me if I’m wrong, the first two singles are “Monument” and “I Remember” correct?

JS: The first will be “I Remember” which will see its release this coming Tuesday, August 27 with “Monuments” following in early to mid-October.

BLAST: It sounds like your close-knit fan base won’t have to wait too long for new material. So, shifting a bit towards you’re upcoming single, “I Remember.” What’s the story behind the song? What makes it tick?

JS: “I Remember” is actually a story about my best friend Tanner, and the struggles he went through while dealing with a breakup. I had written this really neat chorus idea with the basic structure laid out on guitar. So, I came to him with what I had and played it for him and we basically built that song off his recent relationship because it was a very similar situation to what he had been going through.

The whole second verse is an actual story Tanner told me one night which I thought was a perfect fit. Building from that, I had thought of a perfect way to close the story with the song’s bridge section to really drive the emotional feeling behind the entire song.

I was actually sitting in the studio one night while we were figuring out what we could add to the track, and my producer/engineer looked over to me and said; “dude, this going to make me cry.” Which was a great feeling knowing that I had written a story that others could understand from start to finish, and feel the emotion behind it all.

BLAST: “I Remember” sounds like it’s going to be a real tear-jerker. Which is great because I’m a sucker for acoustic emo songs. Is “I Remember” the only SUPER sad song featured on Life’s Not Fair? Or, do you plan on making everyone cry throughout all five tracks?

JS: Life’s Not Fair is meant to be a tear-jerker. Every song is a sad song in its own way. Many different stories that all have different outcomes on why they are sad, hence the title; Life’s Not Fair. Because, not a single person in the world can escape the unfortunate outcomes of life whether it is a bad breakup, all the way to the loss of a loved one.

At some point in your life, you will encounter a time where you think life just isn’t fair. But, in reality, it never is for anyone. There’s always something that will go wrong at some point in time which is what I really wanted to capture with the EP.

“Monuments” for me is the real tear-jerker compared to “I Remember.” Mostly, because it’s something I personally went through and still think about every day. But, both singles will make you cry which is my ultimate endgame; make people feel that raw emotion that drove me to create these songs.

BLAST: From what I remember, I’ve actually heard “Monuments” before. “Monuments” is the song you wrote and dedicated to your late dog correct? Or, am I mistaken?

JS: No, you are correct. “Monuments” is about my dog that I grew up with. I even went so far to get a tattoo just for him to forever be a monument to me.

BLAST: That’s a really nice gesture and I’m sure your doggo would be proud of you. So, why the decision to release “I Remember” before “Monuments?”

JS: Mainly, because we worked on “I Remember” first. It has the most going on instrumentally compared to “Monuments.” “Monuments” has less to it, but we are taking our time with it to really bring out the vibe of the song. If you want a glimpse of what to expect with “Monuments,” I would suggest listening to “Brick Wall” by This Wild Life as that song was a heavy influence in the development process of “Monuments.”

BLAST: This Wild Life is a great band. I just recently got around to actually listening to their discography. Would you say they’re one of the bigger influences on your music?

JS: Oh, they are a MAJOR influence on my creative process. Along with Emarosa, and artists like; Jon Bellion and Ed Sheeran. But, This Wild Life takes the cake when it comes to what I write closest too.

BLAST: Some great bands and artists right there. So, jumping back over to Life’s Not Fair. Do you have a set tracklist planned out yet? Or, are you playing it more by ear depending on what you have finished and ready to be released?

JS: I have a general idea of the last three tracks. I’ve been writing a lot lately and I’ve been finding myself writing more stuff along the lines of Life’s Not Fair. I actually teased one track which will be titled, “Monophobia,” and another I’m working out the kinks with called, “Nostalgia.”

BLAST: Haha, are you afraid of being isolated Jake? But, both of those songs sound like they’ll be great just by their titles alone.

BLAST: Haha see, now I’m upset we won’t be hearing “Nostalgia” for a decent while. I’m sure Life’s Not Fair will be worth the wait. Before we wrap this up, is there anything else you’d like to mention?

JS: “Nostalgia” is in very EARLY development lol. But, there are sneak peeks of that song’s writing process on my Instagram page. Other than that, I can promise all the tracks WILL be worth the wait, and I’m just excited to get the first two out finally! I hope everyone enjoys them as much as I do.

BLAST: Haha see, just full of teases. But, I’m sure all the songs coming soon and in the future will be a great listen. Thank you for taking the time to chat with us and letting us in on what goes on in your musical world. I’m looking forward to listening to “I Remember” when it’s released next week.

JS: I can’t wait to hear what you think!

So, there you have it. Jake SantaLucia will release his new single “I Remember” on August 27 with “Monuments” planned as an October release. No clue on when listeners can expect Life’s Not Fair but isn’t it a bit poetic that we have to wait just a little longer for even more new music? I mean, life’s not fair right? But, from the sounds of it, we’ll be getting a nicely rounded five-track EP versus the previously planned three-track affair that was planned for release this month.

We’ll try and set something up with Jake again once Life’s Not Fair is officially released, and see if we can’t get another round of storytime from this acoustic-pop hopeful to fill in the blanks and plot holes between and around his featured singles. Until then, we’ll have our in-depth track-by-track review of “I Remember” up and running on Tuesday alongside the release of the upcoming single.

So, in the meantime make sure to send Jake SantaLucia some love via his Instagram and Twitter.