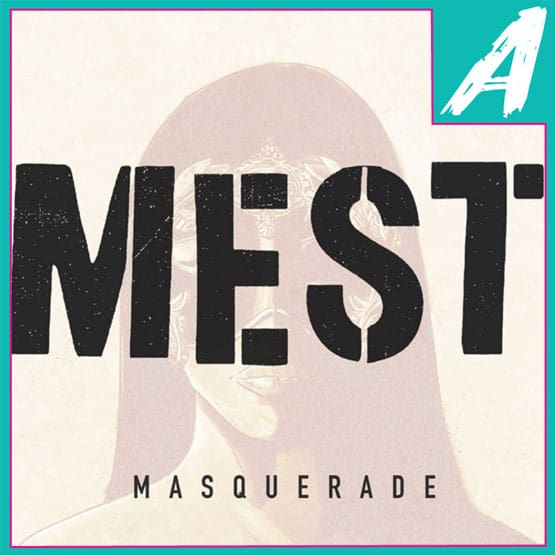 Pop-punk greats MEST are back with new single, “Masquerade,” from their upcoming album of the same name coming this Fall. Premiering first on Idobi Radio, MEST’s latest effort features original members Jeremiah Rangel, Nick Gigler, and Matt Lovato joining forces once more with frontman Tony Lovato who has been keeping the band’s name alive since his one-man reunion back in 2008.

“Masquerade” is the first taste of music featuring the band’s original lineup since 2005’s Photographs. But, is it a little too late for MEST to reclaim their seats among other pop-punk kings? Or, do MEST prove they’re just as good as they were fourteen years ago? Let’s find out.

Wasting no time at all, MEST kick things into high gear with an infectious intro riff that will have listeners hooked within seconds. Taking notes from their “mature” emo pop-punk sound featured throughout Photographs, “Masquerade” features these four men at their prime; Nick Gigler only growing stronger with each beat, coming to a full mess of perfect sound towards the track’s end as he unleashes a flurry of motion that carries MEST’s new single to the finish line, all the way to Matt Lovato’s kick-ass simplistic and fierce bass lines that run through my veins.

Can’t forget the gold stars on the project; Jeremiah Rangel and Tony Lovato and the sweet orgasms that are formed from their dual vocals. Seriously, these two have not aged vocally at all. I’m excited to hear more dual vocals when Masquerade is released later this Fall.

Lyrically, there’s nothing too special about this new single, it’s safe and more predictable than I would like. But, having said that, the track’s lyrics have been running through my mind with my wife singing along. So, take that as you will. “Masquerade” is catchy as all hell and will have you singing along for hours, which makes a good MEST song great.

MEST’s new single provides everything one could come to love about a MEST song; it’s simple, it’s catchy, and you’ll be singing along instantly. MEST songs are never to be taken too seriously, and “Masquerade” continues that trend on a more mature table, picking off quickly where Photographs ended. MEST’s new single is everything I wanted and more from a newly reformed group of some of the genre’s more seasoned players. I’m looking forward to getting my hand’s on the band’s new album later this year.

Once again, MEST’s new single can be streamed via Idobi Radio right now and will be upon all major streaming services starting July 19.

"Some Kind Of Disaster" - All Time Low - Review

By Brandon Flores
Worth reading...
Sum 41 – ‘Order In Decline’ – Review