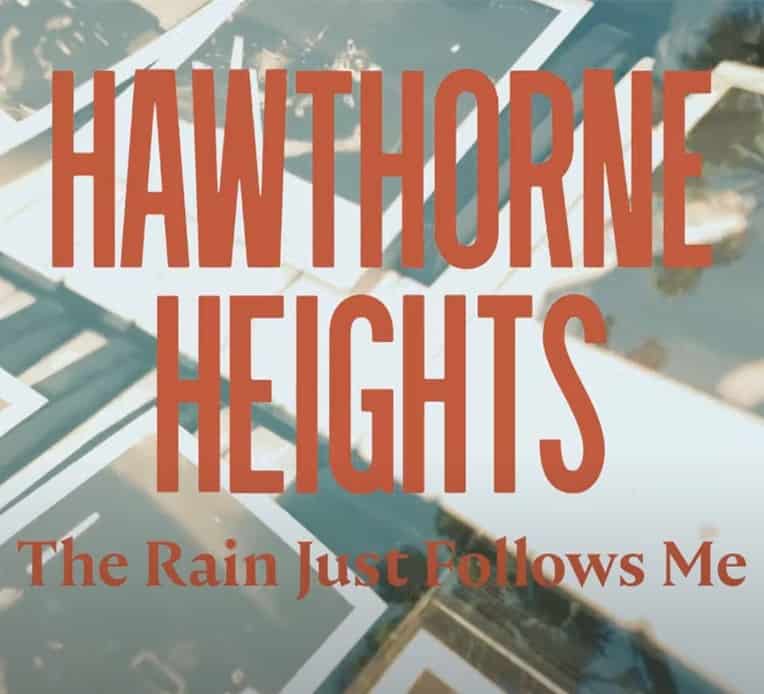 Following their heart-pounding single, “Constant Dread,” Dayton, OH’s Saints of Emo, Hawthorne Heights, are back with their new single, “The Rain Just Follows Me.” A truly emotive and hard-hitting release that I have had on repeat all morning. I don’t think I’ve enjoyed a Hawthorne Heights track this much since the entirety of the band’s 2008 album, Fragile Future.

Also doubling as the title track for Hawthorne Heights’ upcoming studio album, vocalist JT Woodruff shares that he really wanted to “name this album after those lyrics.” Continuing, the Hawthorne Heights singer stated, “it perfectly described what I’ve been going through. During the day, everything seems totally fine, but when I lay down and turn out the lights, my world comes crashing down. If this happens on tour or at home, I usually just think of the coast. I think of the way I feel, watching pelican on the pier.”

“And usually everything will stabilize, but for some reason, nothing was working. When you’re gone for months out of the year, it starts to feel normal. Your entire family and circle of friends have to rearrange their lives to stay connected to yours. And as much as this seems like a woe is me, touring band sob story, it really isn’t about that at all. It’s about how our society has taught us to work ourselves to exhaustion, and at the end of the day, our prize is an early grave.”

Hawthorne Heights’ upcoming studio album, The Rain Just Follows Me, will be released digitally on September 10th via Pure Noise Records and was produced by the always crazy mad-man himself, Cameron Webb. JT Woodruff also shared that the band’s latest 11-song emo masterpiece was recorded before the pandemic.

If you’re more of a physical collector, you can pre-order, The Rain Just Follows Me on two different vinyl variants, which will be released on October 22nd. Also, don’t forget to head on over to Hawthorne Heights’ official website to take a peek at tour dates if you haven’t yet. I know I’m looking forward to catching these guys with Bayside and Senses Fail when they take the stage in Anaheim, CA.